For Cosmo Dinardo, running guns was a family affair.

Cosmo Dinardo just plead guilty today after confessing to the highly publicized murders of four men in Bucks County, PA. If you do not remember, the men were reported missing at different times, and police were looking for them for days, only to find out they were killed by Cosmo and his Cousin, Sean Kratz. 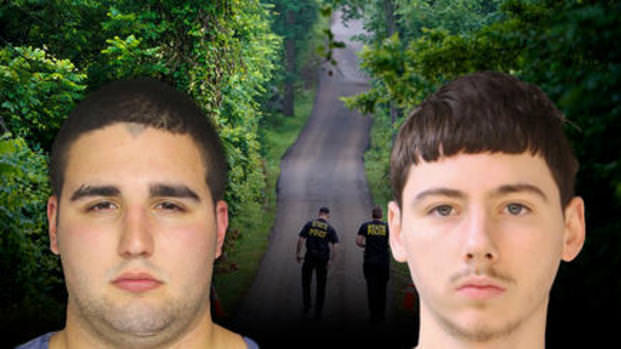 “Your only way out of prison is wearing a toe tag. That’s the least we all deserve,’ said Mark Potash, the father of one of the victims, Mark Sturgis, during todays hearing.

The murdered men were buried with a backhoe on a large property that Cosmo Dinardo’s parents own. When their bodies were first found, rumors were flying about why the kids were killed, until finally some revelations started to come to light that were alleging Cosmo was selling guns, as well as weed, and that this was just a deal gone bad. Being the web sleuth that I am, I decided to see what I could find regarding Cosmo’s past, and what I found shows that Cosmo not only inherited his name from his Grandfather, he also inherited the family business.

While digging through old articles I came across something very interesting from an article from 1993, which was entitled “Loopholes In Gun Dealing Killing Us”.

In the article it explains that there were more licensed firearms dealers in the city of Philadelphia than all of the fast food restaurants combined. Some of these dealers were legitimate, and kept proper records, yet others, like Budd’s Guns, kept no record at all, and within an 18 month period he had sold weapons that were used in the commission of at least 90 felonies, 6 of them being murders. 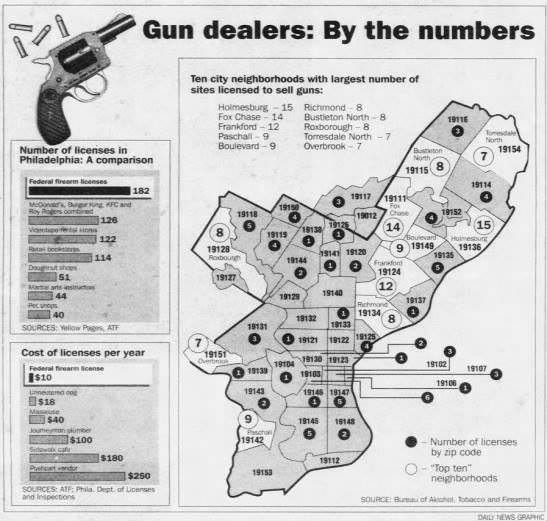 The article went on to explain that many of these gun dealers were operating out of places such as pizza parlors, restaurants, gas stations, chiropractors, and in particular, a printing shop in Northeast Philly called Fels Printing, which was located in the 1100 block of Cottman Avenue. William Fels is listed as one of two people on the federal firearms application, and the other person listed is none other than Cosmo Dinardo, the grandfather of the admitted quadruple murderer, Cosmo Dinardo. 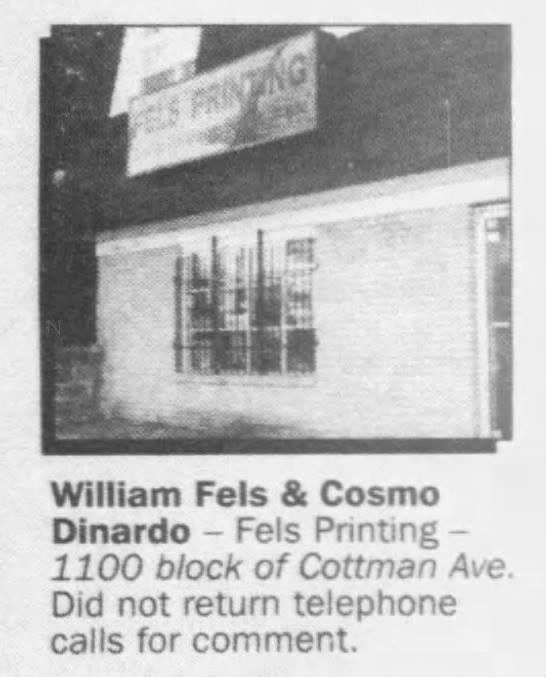 After this was posted I saw a response in a thread by a person named Matthew Bera, who alleged he was in the Brooke Glen Behavioral Hospital with Dinardo in November of 2016. The response read “huh! looks like that shit he told me in the mental hospital was right and he WAS running guns and drugs for his family like I’ve been saying for months”. 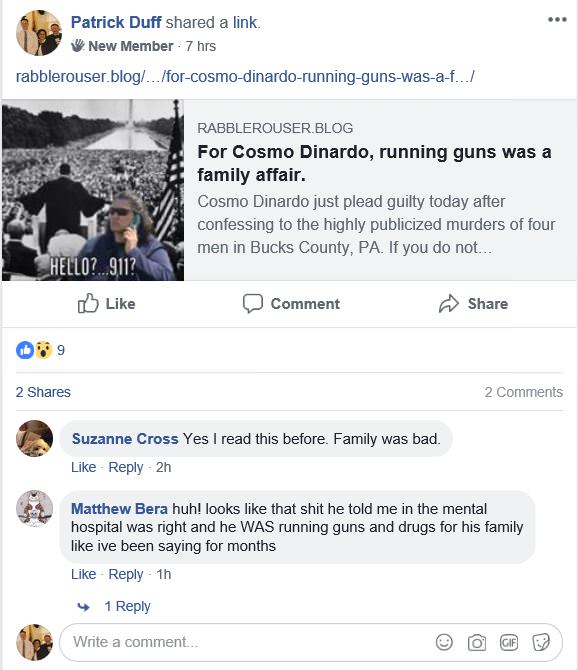 So I contacted Matthew to see if he’d be willing to be interviewed, and he agreed. The following are excerpts from the interview.

Patrick: How long did you get to stay with Cosmo(At the mental hospital)?

Matthew: He was in the same unit as me for about a week, but he kept threatening to attack/kill people, rape the women in there, etc, we had an argument that the orderlies broke up and he got moved to one on one close ops after everyone else in the unit individually complained to the staff that he was dangerous..but that was his whole personality, bragging about being a criminal and saying he would go back to selling drugs, selling guns, and killing people when he got out. I thought he was a compulsive liar and didn’t take him seriously but then i got out and saw the news months later.

Patrick: What did he say about his Family being involved in guns?

Matthew: (He)Said his dad and uncles were involved in it and he could get “any kind of gun I wanted, machine guns, automatic” etc. didn’t go into a lot of detail but one notable thing he said was that ATV accident that was reported on wasn’t an ATV accident, and actually was his dad hitting him in the head with a cinderblock and knocking him out before he killed someone else in the family. Again, he might be a liar AND a killer, so I have no idea if he was embellishing or not. I thought all of it was bullshit until I saw the news that he killed people and it all came rushing back to me.

Uncategorized
← Dr. Jennifer Schulte is not a Stanford Professor, but allegedly, she is BBQ Becky!
→ Shady Real Estate transactions surround Dinardo farm where 4 bodies were buried!

2 responses to “For Cosmo Dinardo, running guns was a family affair.”