Edited on 5-21-18 to reflect the acquired deeds, which also gave the selling price.

The loss of a loved one is never an easy thing, but that is especially true when a parent loses a child, and even more so when they lose them to being viciously murdered. An old Korean proverb says that when a parent dies, they are buried in the ground. When a child dies, he is buried in the parent’s heart.

Mark Potash knows that feeling all to well, his son, Mark Sturgis, was one of the four people murdered by Cosmo Dinardo and Sean Kratz. That feeling came rushing back just two days ago when he turned on the news to hear the confession tapes of the men who killed his son, tapes that he, and the other grieving families, had never been given the chance to hear themselves. The day after they were in court and gave their victim statements during the sentencing, they were made victims once again, but this time it was by the media.

In shock, and with a million new questions going through his mind, Potash took to social media to air his dismay. The first post reads “This is just my opinion/theory but if Daddy pulled into the farm on Friday before my son and Tom were there and saw Cosmo driving the backhoe. besides thinking I need to get out of here before he sees my whore, wouldn’t he at the same time wonder what the fuck he was doing? Now fast forward to Saturday when Mommy starts getting calls about missing kids and calls Cosmo “hysterical” to ask him about it. after that call something happens or is noticed that makes mommy get in her vehicle and drive to the car wash that Cosmo and Kratz were at. Now when Daddy gets the call from mommy about what’s going on , he’s has to remember that he seen his son the night before in the backhoe. You mean to tell me he didn’t go back to the farm and look around? The bodies weren’t buried yet they were still in the smoldering roaster. Also the difference of the clean up job he did after Jimi’s murder and the triple murder were different in the sense that the first burial was average the second was a different level of knowledge and experience. Maybe Cosmo was given some tips on what to do and to do it fast. The confession tapes do mention Cosmo saying Daddy would have helped!”

Just a couple of hours later he posted again, saying “I’m sure the Dinardo’s thought they were in the clear until Kratz changed his mind and asked for a trial, now everything they thought would stay secret will still be exposed!”.

Real Estate records obtained through http://www.buckscountyboa.org show that the father of Cosmo Dinardo, Antonio Dinardo, owns 4 properties in the Township of Solebury. One is located at 5995 Lower York Road, which sits directly in front of the other three properties that are listed as being owned by Antonio Dinardo. The three other parcels, which are located at 6071 Lower Hope Road, equal more than 4.5 million square feet together. 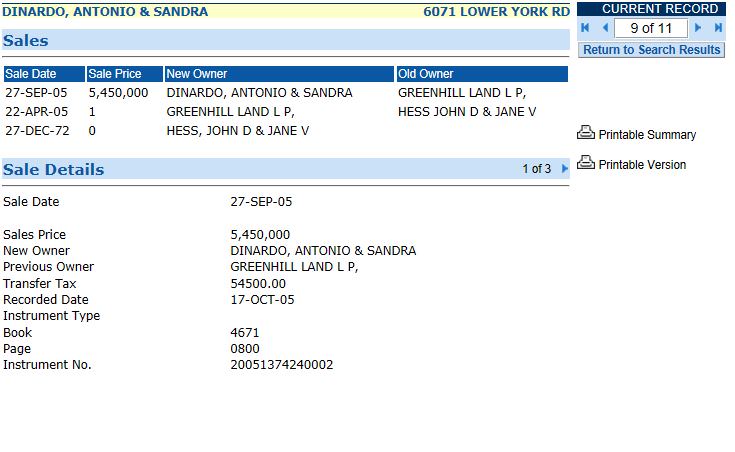 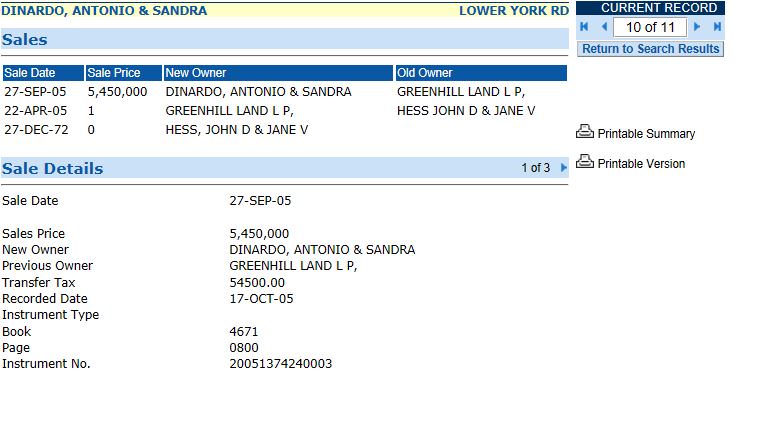 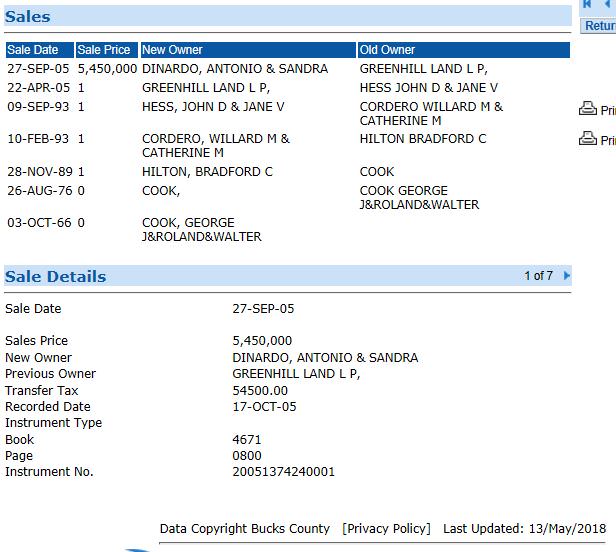 Property records show that they were all bought by the same entity, Greenhill Land LP, who themselves bought the properties on 4-22-2005 for $4,550,000 from the estate of John D Hess, who ironically wrote the first ever soap opera called Love of Life. Greenhill Land LP, who’s address is listed at 6312 Meetinghouse Road in Solebury, registered as a limited partnership on 4-1-2005, just 3 weeks prior to purchasing the three parcels. Hess’s estate also sold two more parcels that belonged to Hess to Aquetong Land LP for another 1,950,000, giving a grand total of $6,500,000 for the estate. 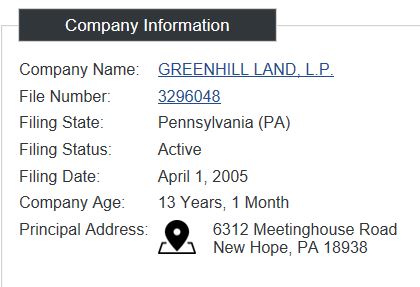 The only Corporate officer named on the PA’s corporation search website for Greenhill was Gateshead Holdings LLC, who’s address is also 6312 Meetinghouse Road, which is also the same for Greenhill Land LP and Aquetong Land LP. The signature for both corporations on the 2005 deeds is John Holmes, who also owned 6312 Meeting House Road at that time, which is better known as Gateshead Farms, a multi million dollar estate in Solebury. 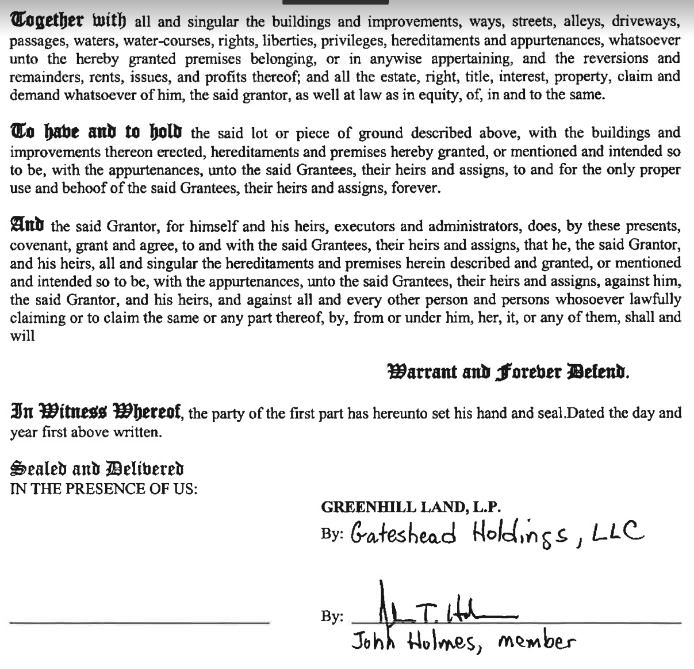 Public records show that Antonio and Sandra Dinardo paid $5,450,000 for the same property that just 5 months before was purchased for $4,550,000. Wachovia Bank granted a mortgage for $3,120,000 to Sandra and Antonio Dinardo, which means that they would have to had brought an estimated $2,500,000 to the closing table to make up for the difference in price, costs, and taxes. 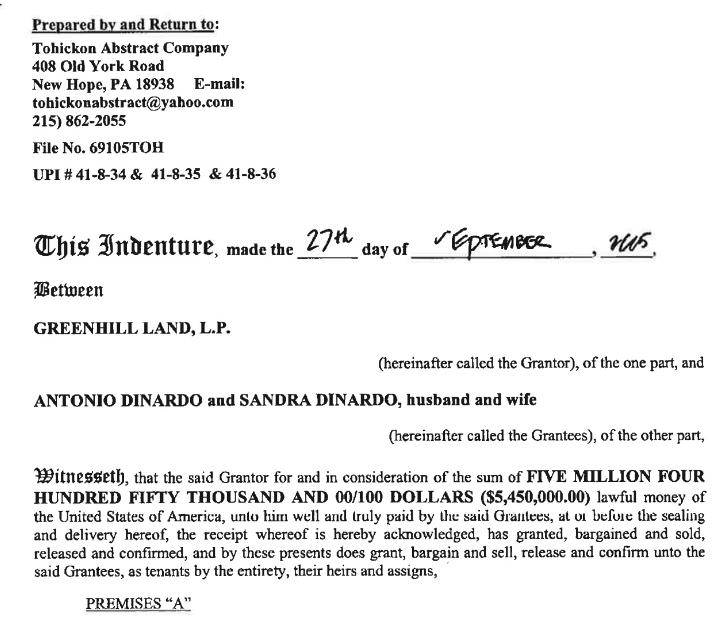 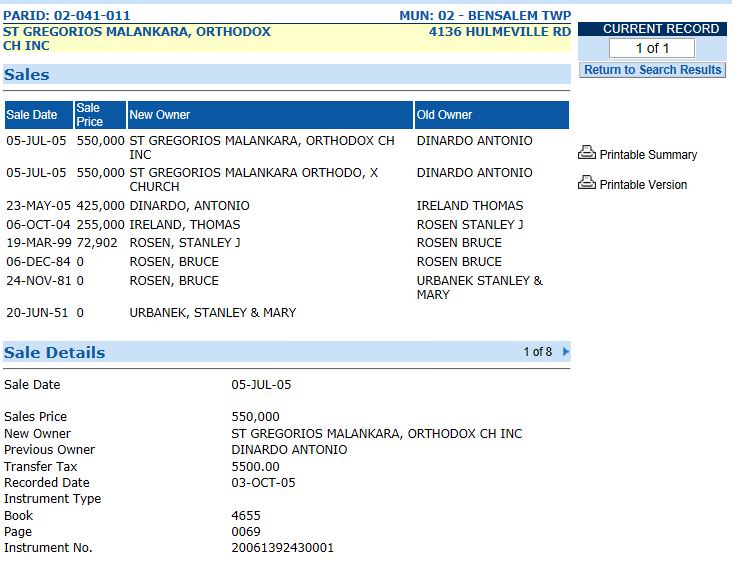 The listing on the property said “Property currently zoned residential, but is located next to a commercially zoned shopping center, so it could potential be rezoned to commercial or professional use.”, which is exactly what happened when the church bought it.

If we are to believe the original proverb about the child living in the parents heart until they die, than Mr. Potash will have no real closure of the murder of his son, Mark Sturgis, until his own demise. The author, Mark Hellinger, once wrote, “Every murder turns on a bright hot light, and a lot of people have to walk out of the shadows.”, or in this case, possibly, into the shadows.

For Cosmo Dinardo, running guns was a family affair.