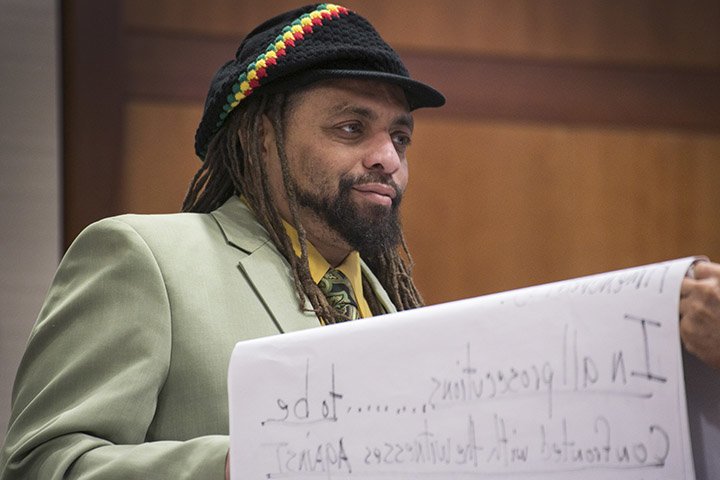 The second trial of Ed Forchion just ended, and even though the jury is still out, I am ready to convict. But I can’t convict Mr. Forchion, because the state never introduced any evidence of a crime, it’s the Judge who deserves to be jailed. I’ll admit, witness tampering is a very serious charge, but it’s not nearly as serious as kidnapping a person for over a year, as has been done to Ed Forchion by Judge Anthony Massi.

Judge Massi used the newly minted bail reform act as his justification in the kidnapping of Forchion, but Forchion doesn’t fit the profile of being violent or being a no show for his court dates. Let’s be honest here, Ed Forchion loves to go on trial, he wouldn’t miss it for the world, so why the need to hold him without bail?

One thing courts think they have is ultimate power, and normally, they do. But not against Forchion, who knows their secret…that they have no power unless you plead to what they want you to, which is something they knew he was not willing to do. They also knew Forchion has beat several other prosecutions, where unlike this case, the state actually had evidence of what they thought was a crime, but for some reason that they can’t understand, the jury still said, “Not Guilty”. For the courts, being beat by anyone really gets under their skin, but even more so when that skin that is providing the whooping just happens to he black.

When Detective Ward was testifying she could not identify any instance where Forchion broke the law, and instead, she said he was being prosecuted on the totality of what he had done., which if you ask me, is because he is a black man who refuses to capitulate to the unjust system he seems to whoop everytime, which drives Whiteys nuts. Free the Weedman!

Thanks to My Minute Minute for taping. The full trial can be seen below.