Kevin Sabet And The Missing McMillions.

The nations biggest anti-pot protagonist, Kevin Sabet, has some questions he needs to answer, legally. Actually, there are millions of questions, as in where is the nearly million dollars in stocks that disappeared from the years 2017 to 2018, and where are the 990 forms for NJ-RAMP, the organization that was founded by Sabet and Patrick Kennedy?

Where though does such a guy like Sabet come from anyway, and just how long has he been a shill against pot? I think that Kevin’s Father, Dr. Zabi Sabet, who is a Psychologist who immigrated from Iran and wound up working for NASA and several other Government organizations, might have had something to do with it. I wonder, did Pop use some of that hypnosis on his son to be such an anti-pot crusader, or was there another, more powerful force at work? As you can see in the pictures below, the apple didn’t fall very far from the tree for Sabet.

Nothing though is more powerful than the influence of a mother, and Kevin’s mother, Sophie, was quoted in the 1992 LA times in an article about the families faith, Baha’i, and how it guides her children. It seems Kevin didn’t have that much of a chance and was being indoctrinated from a very young age to become the anti-drug warrior he has become, from both his religious beliefs as well as what he was being taught at home.

In 1997 Kevin was a senior at Canyon High School in Anaheim California, where he was a 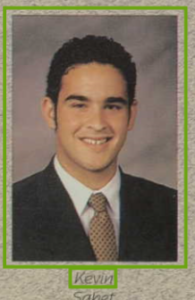 proud member of the local sheriff departments anti-drug program, and this is where he

got his first taste of getting his name in the papers.

After graduating Kevin left Canyon High School and began college at the University of California in Berkeley, where again, he took up the anti-pot stance and started to get noticed. At Berkeley, Kevin’s career and image as an anti-drug warrior 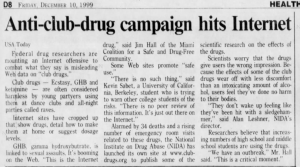 was now making the newspapers all over the country. On June 16th of 1999, a “joint” subcommittee was convened on drug use in the house of representatives where a letter by a 20 year old Kevin Sabet was read for the entire congress to hear.

The Congressional record shows the following about Kevin from 1999:

anti-pot warrior, and by now he was being quoted in papers all across the country, even being asked to speak about his beliefs to families all the way in Decatur, GA.

So now that we know that Kevin was intentionally created as the Manchurian Candidate against Marijuana, we can understand him a little better, this has been his MO since he was just a child. We get it, Kevin, you are holier than thou and without fault, except it seems when it comes to filing taxes for the last 2 years for your organization, NJ RAMP, which Kevin and Patrick Kennedy claimed to have founded.

The word “claimed” is used because Kevin was not the actual founder of NJ-RAMP, even though on the NJ-RAMP website it says that him and Patrick Kennedy are the founders, so why lie? As we reported last year the real founder is the infamous anti-pot crusader and CEO of Preferred Behavioral Health Group, former NJ Assembly person, Mary Pat Angelini. NJ-RAMP, which is oddly registered in the state of Delaware and not NJ, has never filed any 990 forms as required by the IRS for 2017, 2018 or 2019, even though we know they were illegally paying former Mayor Stephen Reid as their unregistered lobbyist.

Why is Kevin fronting with Patrick Kennedy as the founders of an organization that was actually founded by Mary Pat Angelini? Oddly, Patrick Kennedy’s wife, Amy Kennedy, is running as a “progressive democrat” for congress in NJ. So why is her husband playing the front man for one of the heaviest republican players in the state? Does the Democratic party have another possible Jeff Van Drew on their hands, which is ironically the person Amy will be facing off against. 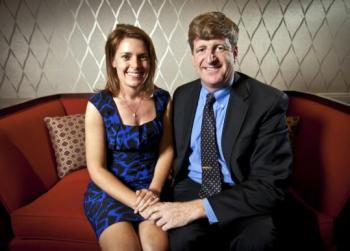 6 responses to “Kevin Sabet And The Missing McMillions.”