In 1871 a group of 20,000 men took to the streets in New York in what was known as the Great Eight Hour Parade, or the Parade of Working Men.  The parade was really more of a protest, but since it was a large group of white people, they just call it a parade.  They were protesting the working conditions of the time and demanding that the work day be cut to 8 hours per day.  There were at least 19 unions represented and the papers reported anywhere from 8,000 to 20,000 people present. 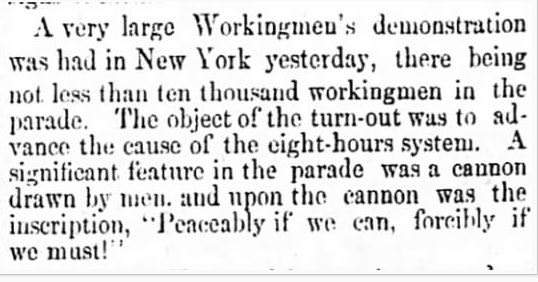 A cannon was being pushed down the street with a large banner saying “Eight Hour-Law. Peacefully if we can, forcibly if we must”, and other banners with sayings such as “when peaceful efforts fail, then revolution”.   The parade was organized by the Knights of Labor, who at the time were a clandestine group trying to form a centralized labor union for all workers, and who were also a group of hardcore Socialists.  The red flag of Socialism flew over most of the parade, as it would for the next decade or more.

One of the young up and comers in the socialist movement was a man known as P J McGuire, later known as Peter J McGuire.  Peter was considered an extreme radical, with the opposition calling him a Communist, of which he denied.  Peter was in favor of abolishing the wage system and replacing it with a stead co-operative production, with a just distribution of it’s rewards.  Peter fought for the abolition of child labor and prison labor to private sources, against any laws that would prohibit workers to unionize, and also for things such as abolishing the private baking industry and making all banks a goverment function.  To say the least, even in todays standards, Peter was a radical.

In January of 1874, Peter, along with several hundred men went to the city hall to find out why work on two projects had been halted and to demand work so people could feed their families.  They were there to speak to the Aldermen of the city government, but the police would not let them enter. That’s when Peter turned to the crowd and said “Please remain where you are, do no violence in the meantime….when they refuse it will be time to enforce our rights”.  The door to the building then swung open from behind the police line and Peter pushed his way through along with the four other representatives.

After not getting the answer they wanted from the Alderman, they went to the clerk to find out why the projects were not started, only to find that the Alderman had lied to them about his role.  Marching back to the council chambers they were met again with police, but Peter pushed his way through and forced himself back into the chambers to let them know of their findings.  Just days later another “parade” was to be held and Peter sought a permit to march back to city hall but it was denied.  The police told him that if they tried to march in the square that they would be met with violence, and that is exactly what happened.

In January of 1874 Peter McGuire wanted to have the parade of working men end at City Hall, but the police denied him the permit and Peter was arrested for refusing to leave the office.  The next night 7000 men marched into Tompkins Square and 1500 police met them with brutal force, with one person dying and 46 men arrested.  It was known as the Tompkins Square Riots, and Peter was at the helm.

These first years of what was known then as the Working Men’s Parade, or Parade of Working Men, would continue to go on for the next couple of years, with Peter McGuire at the helm and with marches taking place all over the country.  Peter was a paid agitator for the Socialist Democratic Party and would travel around the country seeking to agitate the locals to have their own “parades”, which were more like walk outs followed by a protest in the streets.  His job was to pump up the base and recruit new units of the Socialist party, of which he did very well. 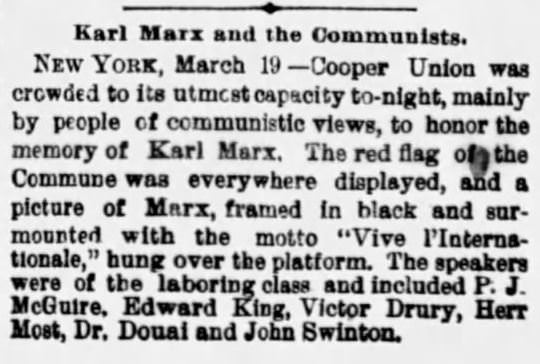 For the next couple of years Peter traveled across the country having rallies in dozens of cities, including a massive march that took place in Camden, NJ on May 1st 1881 where thousands of men walked out of work.  Just a couple of days before the Camden Parade Peter was arrested for conspiracy to start a riot, as well as threat of bodily injury to an ex union member, who Peter admitted to calling a scab and a rat but refused he ever threatened him.  In that same year Peter did something that he said he had no intention of doing, he ran for office in the 19th ward under the Democratic Socialist ticket, and won.

On July 5th of 1882 a socialist labor leader from Ireland, Michael Davitt, was welcomed by the Secretary of the Central Labor Union, Matthew McGuire, along with thousands of people to hear him speak.  The speech was followed by a massive demonstration in the streets with the people demanding such things as an eight hour work day and no more child labor.  The demonstration was considered to not be very successful so another demonstration was planned for September 5th.

On September 5th of 1882 the Central Labor Union sponsored the largest gathering ever put together for the Parade of Working Men, some estimated as many as 50,000 marchers.  The marchers were carrying signs saying “No man can make land, hence no individual should own it” and “Down with the railroad monopoly”.  Matthew McGuire, who was also a member of the Knights of labor and the socialist democratic party, invited the local politicians and dignitaries to be present. 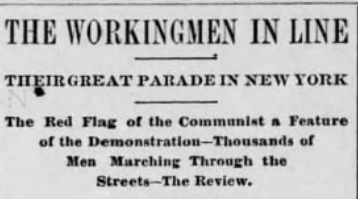 “This is labor day in earnest, Uncle Dick”, was the remark made by a man named Robert Price to his Uncle, Richard Griffiths, who was the General Worthy Foreman of the Knights of Labor, and from that point on, the Parade of Working men was known as Labor Day.  That’s right, Labor day comes from 19th century Socialists who were demanding things that even Bernie Sanders would cringe at.  5 years later in 1887, the city of NY would recognize the first Monday in September as Labor Day, and the holiday was born. 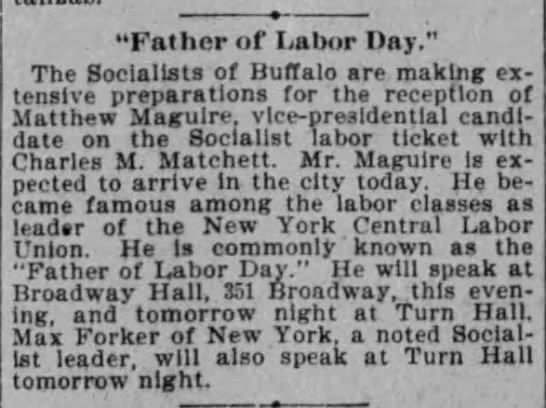 Matthew was the secretary of the Central Labor Union and he would later go on to run for Governor of NJ and Vice President of the United States, all under the Democratic Socialist Party.  Matthew was also against private land ownership and monopolies.  In 1883 Matthew is quoted as saying “The railroads control the legislature, the judiciary and both the Republican and Democratic parties” He went on to declare that a third party was needed to stop the tyranny and fight for the common people.

The argument over who is the father of labor day has been going on for over 100 years, some say it was Peter McGuire, and some say it was Matthew McGuire.  Both McGuire’s were members of the Socialist Democratic Party, both union leaders, both were integral in some of the first parades,  and both were considered by either side of the establishment to be radical communists.  Either way you cut the cake, the father of Labor Day was a hardcore socialist who have had their history hijacked to tell a patriotic tale of a day to celebrate the workers, when that has nothing to do with what the original “parades” were about.

Labor day wasn’t about sticking your toes in the sand, as it is today, it was about collectively sticking our boot up the someone’s butt to make the world for the common man a better place.  It wasn’t about getting a free day off, it was a massive walk out to show the powers that be that the people were mad as hell and they were not going to take it anymore. 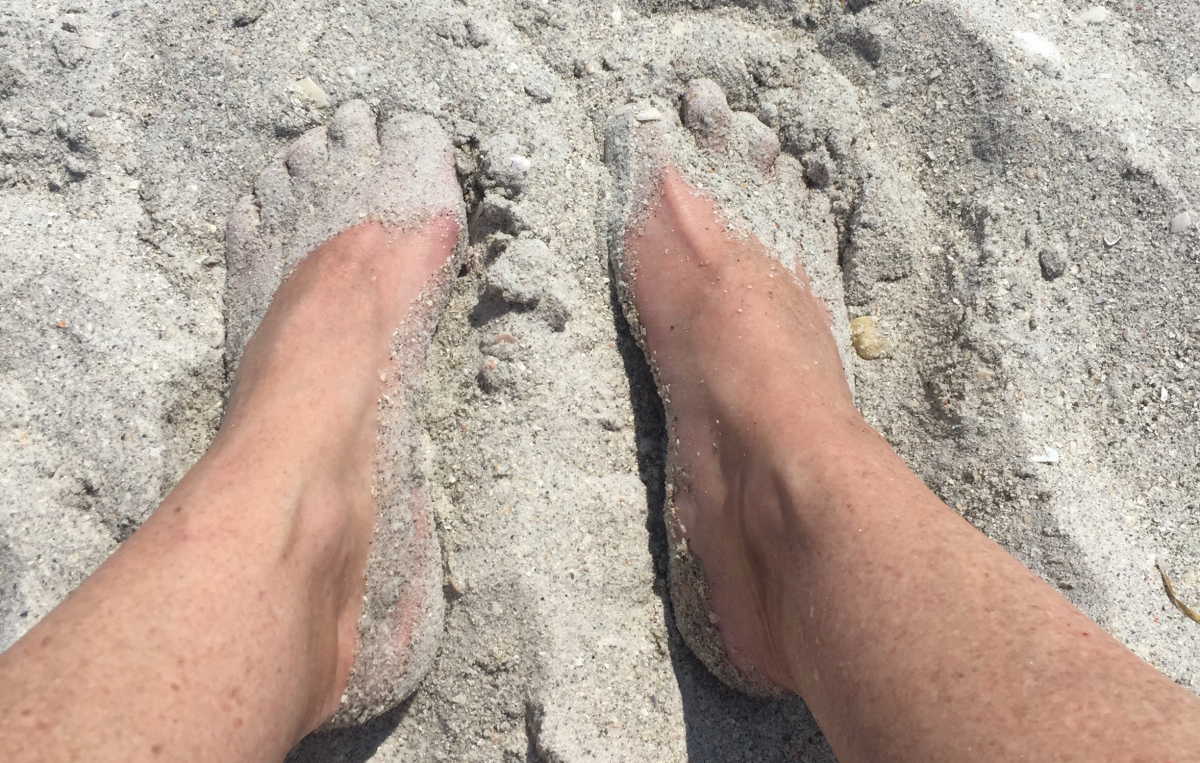