When Rosa Parks left Alabama for Detroit in 1957, she stayed with her brother, Sylvester McCauley, in a little house on Deacon Street. It was a quaint little home where she would stay of and on for the next couple of years, as well as the house that Rosa delivered several of her own nieces and nephews as a midwife for her sister in-law. 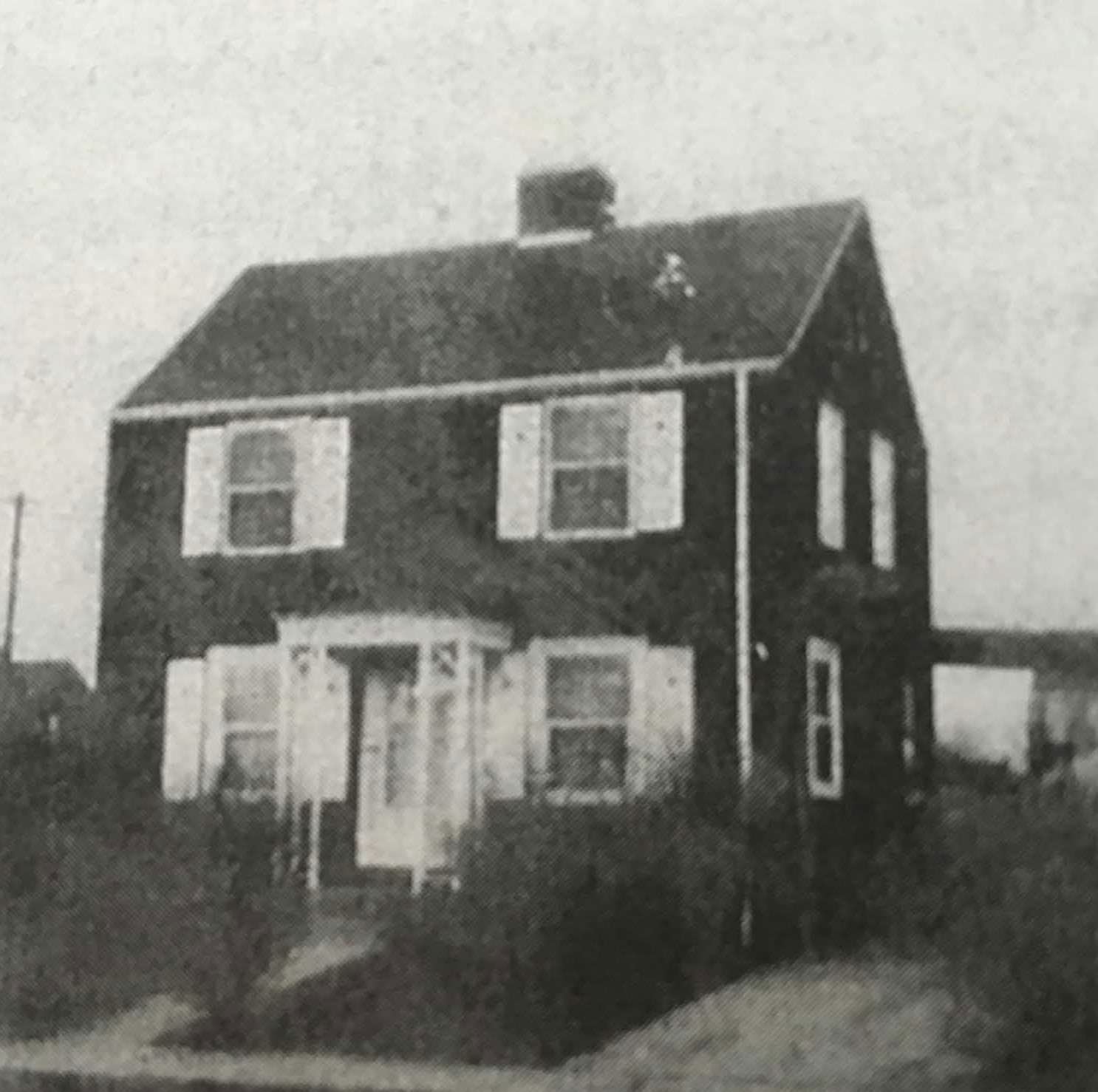 In 2015 the home was placed on Detroit’s demolition list and it was set to be destroyed, that’s until the niece of Rosa Parks, Rhea McCauley, saved it by buying the property for $500. 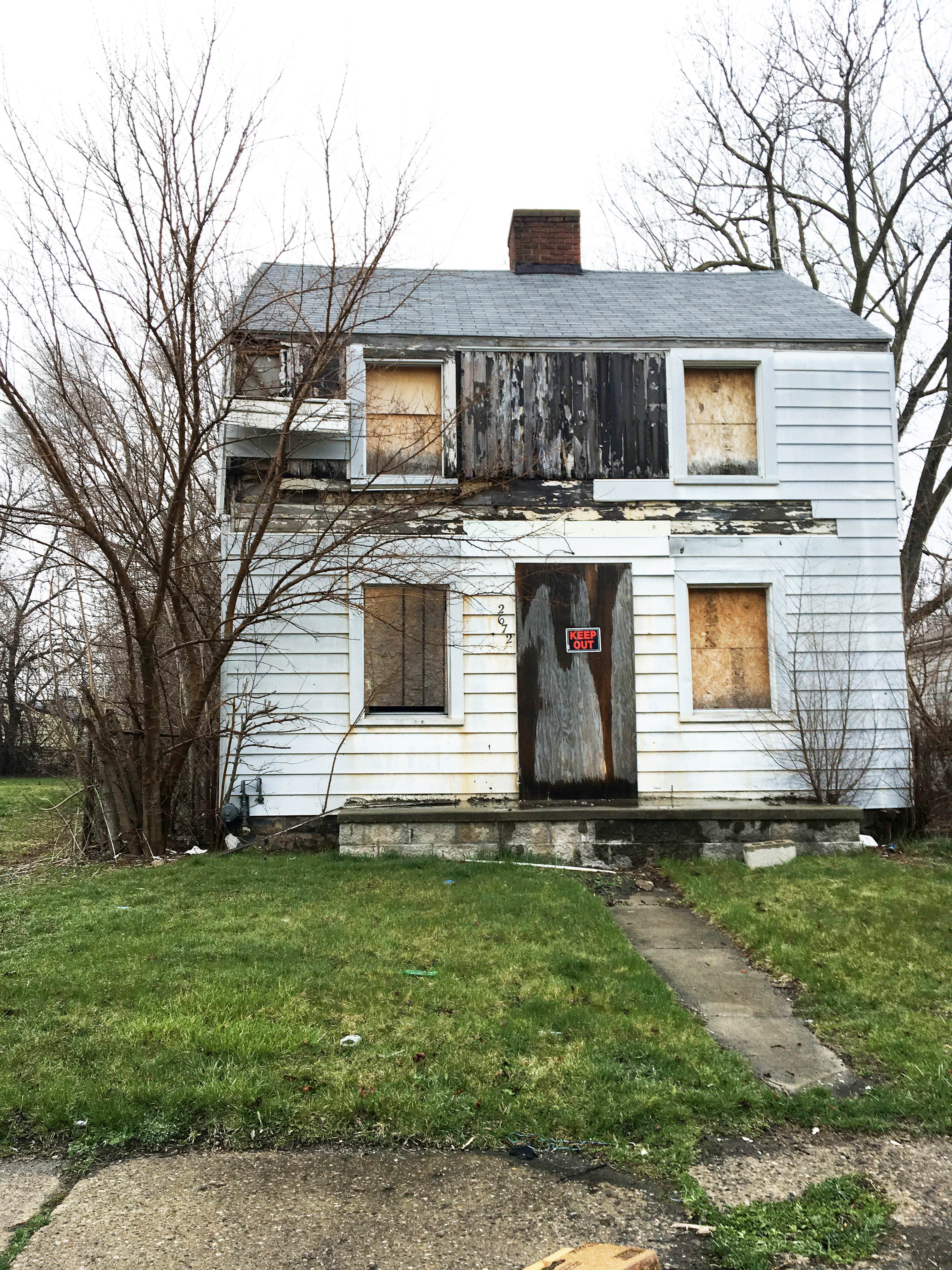 The house was then packed up and shipped to Berlin Germany, by artist Ryan Mendoza, where he reassembled it as a work of art in his yard for all to see for free. Mendoza decided that after certain events took place in America, such as what happened in Charlottesville, it was time for the house to come back home. 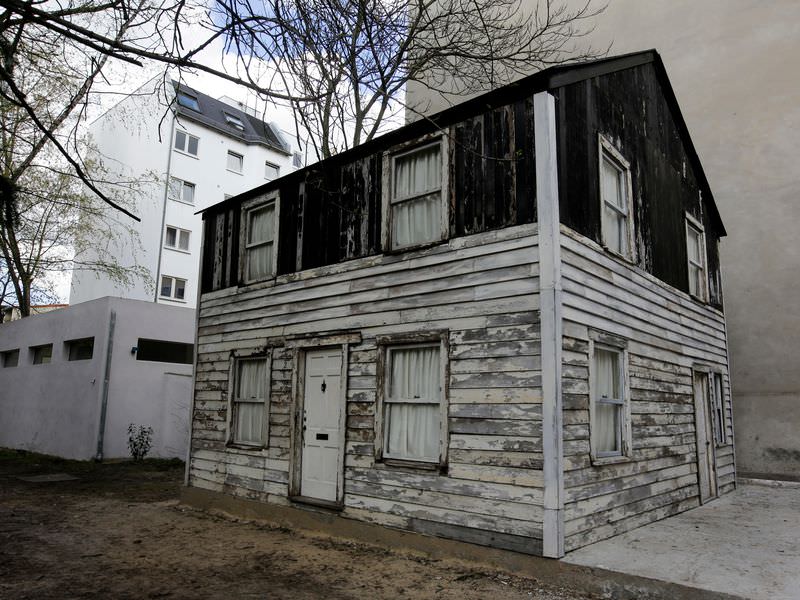 The house has since been on a long journey that has finally landed it in Providence Rhode Island, where it sits partially reassembled in an old rubber factory that now houses the Waterfire Arts Center. The home was planned to be a part of an exhibit highlighting the civil rights movement that was being hosted by Brown University, until on March 8th, it was abruptly canceled. 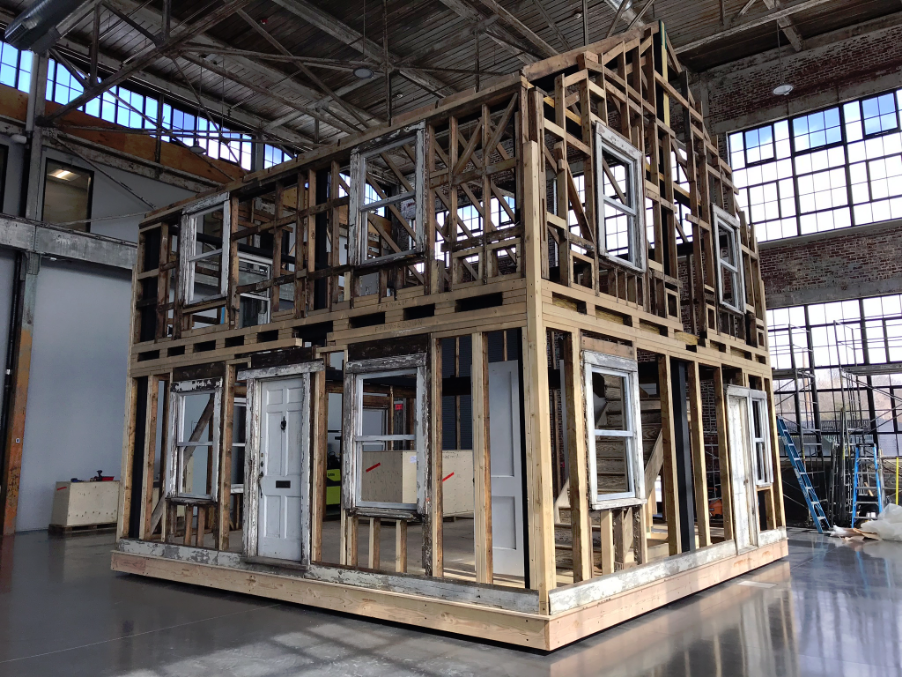 The reason behind the cancelation was that the Rosa and Raymond Parks Institute’s lawyer, Steven Cohen, said that Rosa never lived in the house and therefore, it’s a misrepresentation to say that she did. He went on to say that the house on display was just as much his house as it was Rosa Parks house, and that her real house in Detroit was located at 9336 Wildemere Street. The article I read this from was dated February 21st, so why did they wait to cancel the project until March 8th?

Knowing something was fishy I dug a little deeper and found an article on http://www.deadlinedetroit.com where Ryan suggested that because of Brown Universities ties to slavery, they may reconsider changing their name to “Rosa Parks University”. The article was time stamped 8:57 am on March 8th.

The next article to be published about the exhibit was on March 8th at 2:57 pm in the Providence Journal, entitled “Brown University Cancels Rosa parks House Exhibit“. When I went back to the first article and read the comments I was intrigued by one in particular, it was by Sylvia Brown, who just happens to be the heiress to the Brown fortune.

Once I read her comments I felt the real reason for the cancelation wasn’t because some lawyer from Detroit making claims 3 weeks prior, I felt it was because Sylvia was grappling with a legacy being tarnished. To have some fun, I sent Sylvia some tweets to see if I could get her to talk, and she did. What she said proved to me that she was involved in the cancelation. First she said she had no involvement, but then she said that Mr. Mendoza is mad because he is losing his “5 minutes of fame and his fee”, but no newspaper mentioned anything about a fee, so how would she know that?

I knew that even though my hunch was that Sylvia was the cause of the cancelation, the only way to force Brown’s hand was to prove the Institute was lying, so I started digging again. After about 3 hours of searching I found an article from 1961 in the Pittsburgh Courier where Rosa speaks directly about the Deacon Street house and her brother, Sylvester. 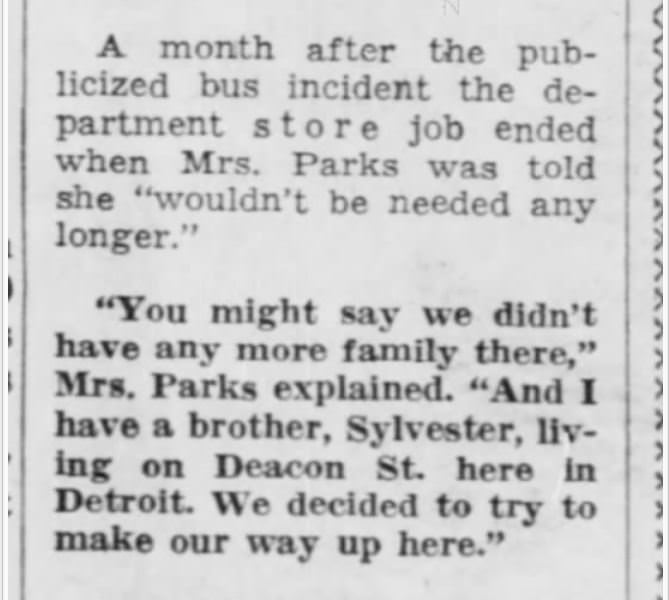 Once I found this little clipping I knew that the institutes claims of her having no connection with the house was now proven to be incorrect. So I contacted the artist, Ryan Mendoza, to let him know what I found, and he couldn’t have been more appreciative. He told me he had to pack up the house and leave, but I told him that’s not going to happen. I then sent the clipping and a message the Institute to see if something can be worked out.

The weird and cryptic emails I was getting from the Institute began to push me even further to see what else I could find out about where in fact Rosa Parks actually lived in Detroit. Was it Deacon Street where she lived, or was it Wildemere Street? The answer, surprisingly, is it was both. But the institutes claim of her living on Wildemere Street in 1957 was a complete misrepresentation, because from the timeline I built she didn’t live there until 1988!

Below is the timeline I built including the links to the evidence:

Mid Summer 1957 Rosa heads to Detroit to stay at Deacon St until they could find a place. (oral history, Rosa Quote from 1961)

August 1957 Rosa and Raymond move to 449 East Euclid Street but she can’t find a job and her husband has to wait at least 6 months to get his barbers license. (Pit Courier Aug 17 1957) 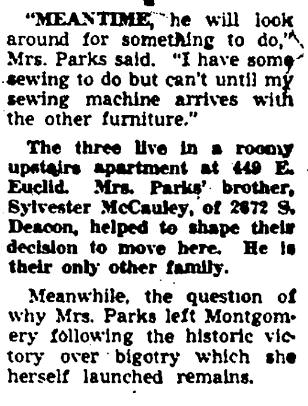 Oct 1957 – Nov 1958 Rosa moves to Hampton VA, and stayed at Hampton University as a hostess at the Holly Tree Inn guest house. Interestingly enough, the freshmen class of that year were the seniors who lead one of the first sit ins during the 1960’s. (Baltimore Afro American Oct 19 1957) 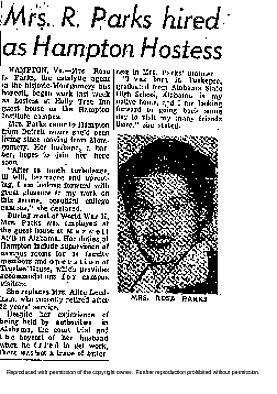 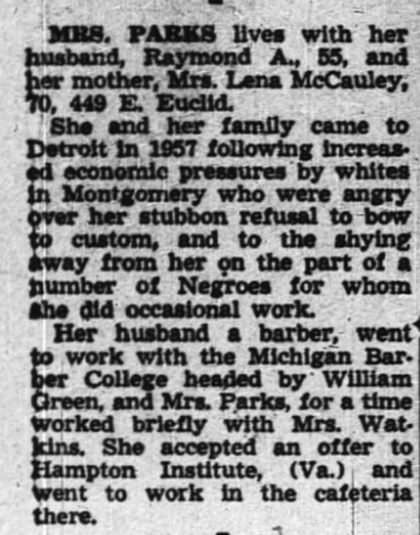 June 1960 Rosa is now at 1930 west Grand staying as a caretaker in a place furnished by the Progressive Civic League. The League as well as several local churches throw a benefit for her. (Detroit Free Press June 11 1960) 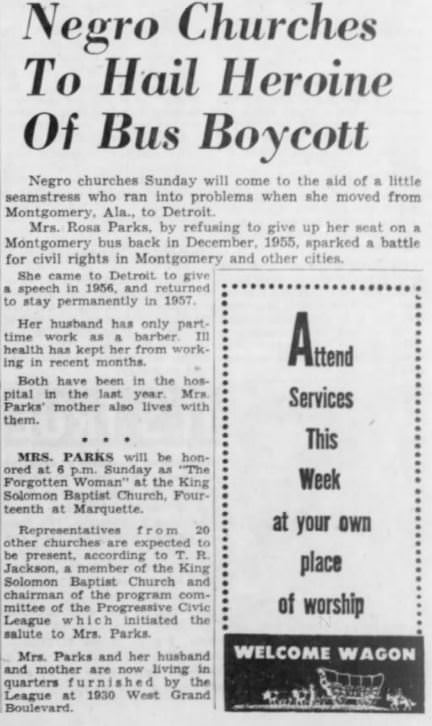 1976-1978 The Rosa L. Parks Shrine Committee is formed to build Rosa her own home and shrine for her after she passed. Sadly, nothing was ever built and the money disappeared. 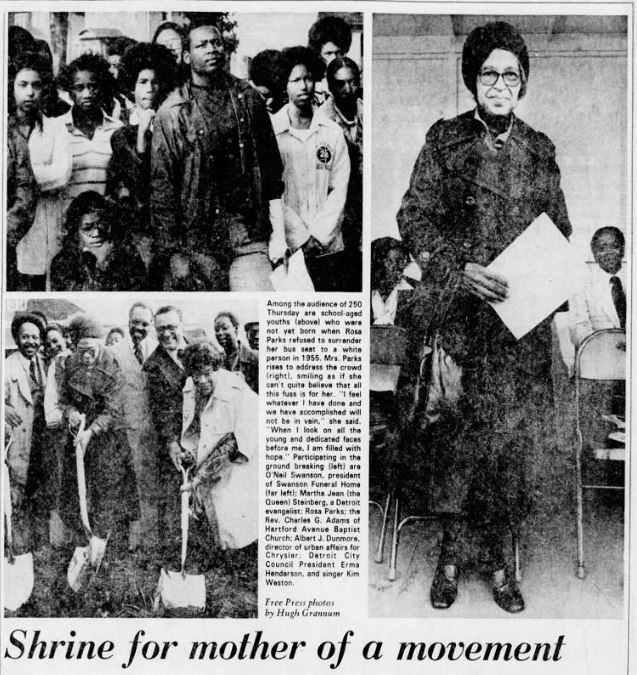 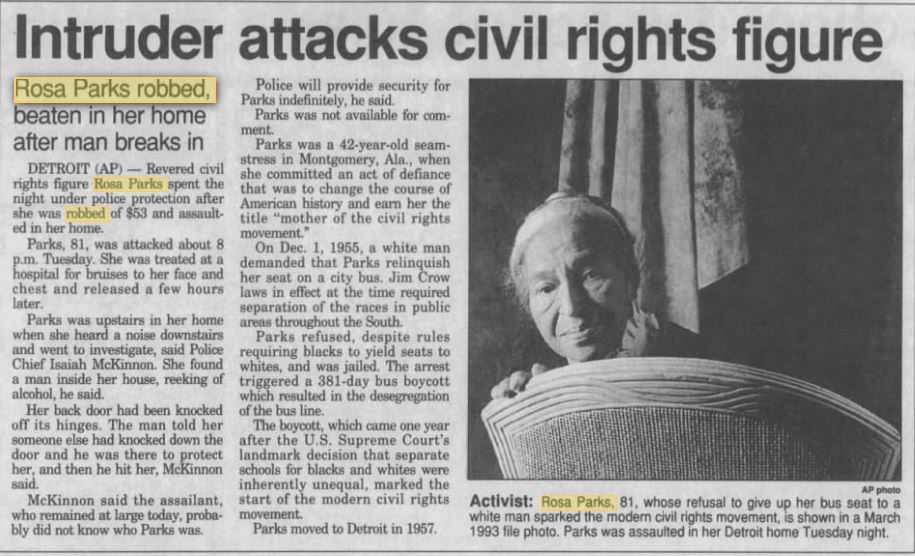 Once I had the timeline formed I ramped up my attack and sent off an editorial to the Brown Daily Herald entitled, Rosa Parks exhibit should not give up its seat. I also called the Dean of Brown to let her know they were cancelling the exhibit based on what is now known to be a misrepresentation, but I didn’t hear anything back.

So I waited a while to hear back before I sent the entire senior faculty, the Dean, and the Alumni Association of Brown University, the following email

During the same time I was prepping a reporter in Detroit, Frank Witsil, to run the story of the Timeline so I could use it as some leverage against the institute and Brown. The story broke on March 29th in the Detroit Free Press and it spelled out the timeline for everyone to see. The Institutes story was publicly smashed, as was the “reason” that Brown canceled the exhibit, so I made sure to again send a copy of the article to the same group as I did before.

That weekend I was invited up to see the house and also speak at a 2 day only exhibit, which Mendoza was calling, Farewell Rosa Parks: Outcast in Your Own Country. I gave a rousing speech, which included a loud chant of “SHAME ON BROWN”, and I let the crowd know of the fact Brown was canceling the exhibit based upon a misrepresentation. To say the least, I rocked the crowd.

At the end of that week I got a call from Ryan Mendoza, saying that Brown University is now agreeing to pay for the show, but is not publicly supporting it anymore. The odd thing about Brown University saying they aren’t supporting the exhibit is that their professors and students are supporting it. Once the contracts were signed a press release was sent out and the media href=”https://www.apnews.com/2a721feb683d4c1780c579cf776117a2″>reported the great news around the world.