A CDC report from August of 1981 showed that out of the first 26 cases of what would be later known as HIV, 20 of them were in New York City, while the other 6 were in Los Angeles and San Francisco. Of those 26 cases, 25 were white homosexual men, and one was black homosexual man. In 1999 a group of scientists discovered that the original source of the HIV infection came from a Chimpanzee, but it seems they have been left guessing as to how the infection crossed over into humans. Scientists and Doctors also have not been able to explain how this very targeted section of a population, from such very small areas, which were thousands of miles apart, somehow started coming down with a new virus from a Chimp that comes from West Africa.

The only logical way that I could come up with was that some type of medical experiment either went wrong, or quite possibly, did exactly what it was meant to do. Did a large group of gay, mostly white people, from New York City, San Fran, and LA, volunteer for some type of secret medical experiment involving chimps in the late 70’s or early 80’s that could have caused this? The answer is quite simple, yes, but it wasn’t a secret at all.

The New York Blood Center had been testing the hepatitis B vaccine since at least 1969, with many of those trials being conducted on Chimpanzees from West Africa. When the importation of the Chimps became too expensive, the New York Blood Center started doing trials in West Africa at the Liberian Institute of Biomedical Research under the name Vilab II. In 1978, the Vilab II project in Liberia had a total of 72 chimps in the hepatitis research program. One of those chimps, who they called Judy, or Chimp #76, was brought to the New York Blood Center in February of 1978 for an emergency surgery for a tumor in her mouth. Judy was one of four Chimps immunized with the Purcell Gerin I.H Hepatitis Vaccine two years prior, and she was set to be given the live Hepatitis virus in July.

“She is a very key element in our research”, said Alfred M Prince, head of the laboratory of virology at New York Blood Center. 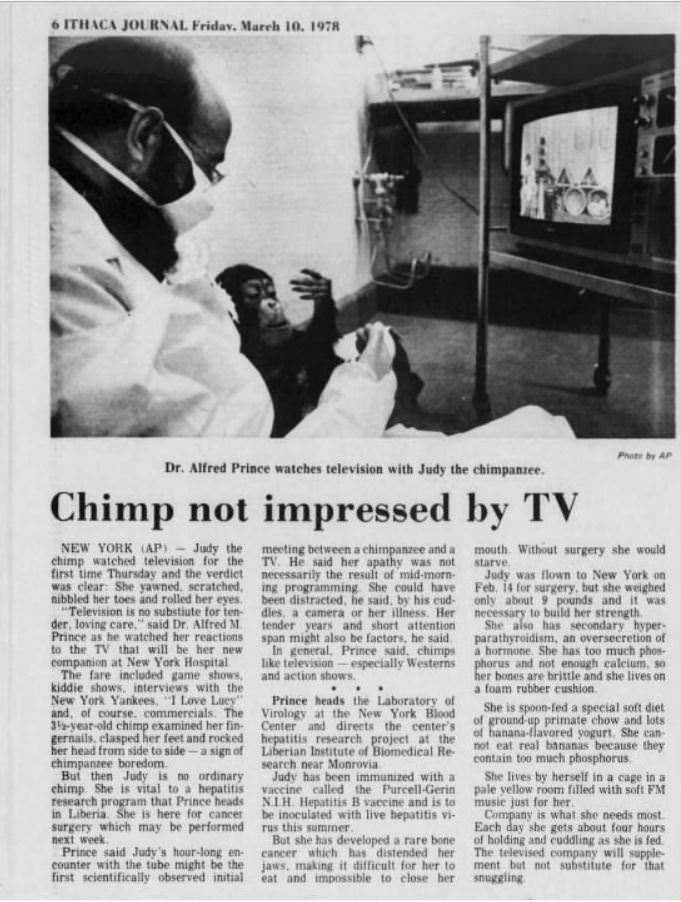 On June 17th of 1978 the AP reported that the Centers for Disease control announced the discovery of a virus like particle that was thought to be crucial in the development of vaccines.

“If this virus is what we think it is, then we can use the virus or antigen to develop sensitive and specific tests for the detection of this virus in the blood or serum of the donors so that the disease can be minimized” said Don Berreth, a spokesmen for the Atlanta based CDC. Berreth went on to say that the most immediate benefit would be the ability to help screen donor blood so contaminated blood would not be used for transfusions. 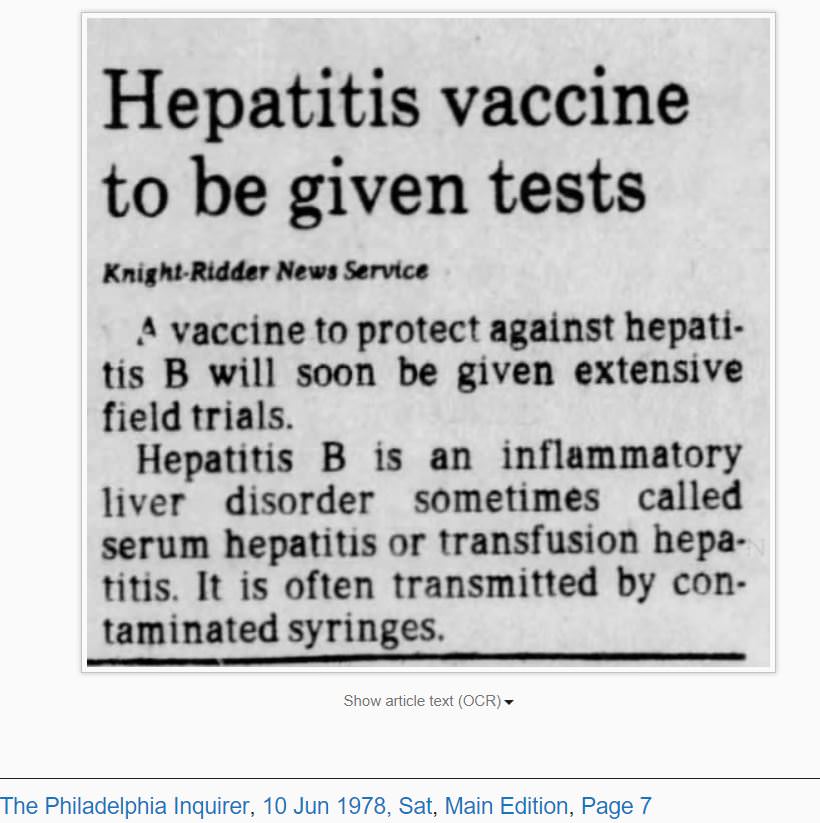 On June 10th of 1978, in the Philadelphia Inquirer, I found a small clip with the headline “Hepatitis Vaccine Test to be Given” and it reads “a vaccine to protect against hepatitis B will soon be given extensive field trials”. 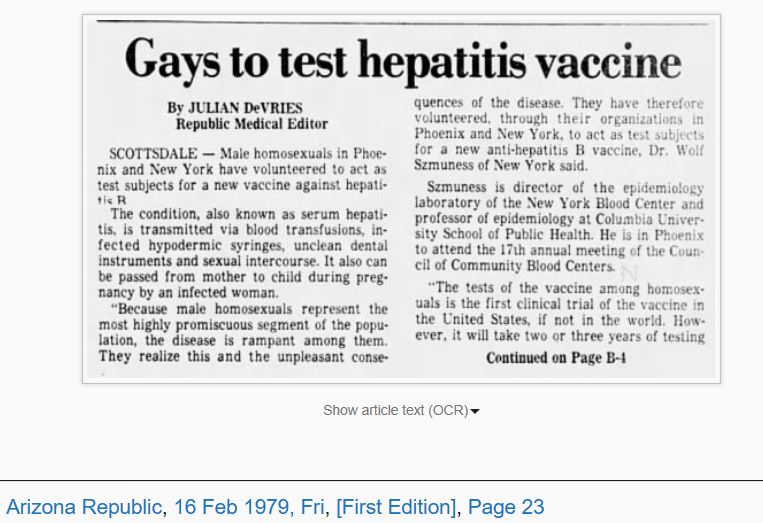 In November of 1978 the first round of experimental Hepatitis B Vaccine trials began on 1082 men at the New York Blood Center. The only participants were a group of mostly white, well educated, gay men who were admittedly promiscuous. In planning the trials Dr. Wolf Szmuness chose to only use gay men in order to avoid “serious legal and logistical problems”. Dr. Wolf Szmuness was born in Poland in 1919 and trained as a biochemist in Russia. Szmuness had been working for the Russian Government on viral experiments on humans since the early 1960’s, specifically with the hepatitis virus. He was expelled from Poland in 1968 in a communist purge and came to America with no job and only $700 dollars in his pocket and started working at the New York Blood Center in 1969.

The second round of trials took place in 1979, and again were only performed on Homosexual men at the New York Blood Center. In March of 1980, 1,402 gay men from New York, Chicago, Los Angeles, San Fran, Denver and St. Louis began testing the vaccine. The first reports of HIV like symptoms started being reported in early 1979 in Manhattan, which was just a couple of months after the first trials began, and which was also where the testing station was. The only other cities as of July of 1981 that had any documented cases of HIV were in San Fran and LA, two of the other five cities from the trials. The first reported case outside of NY was in San Fran in the fall of 1980, which again was just months after the Hepatitis B trials in that city began.

The Hepatitis trials were well publicized with headlines like “Gays to Test Hepatitis Vaccine” and “Homosexuals Here to Aid in Test of New Vaccine For Hepatitis”, so it’s not like it was hidden. 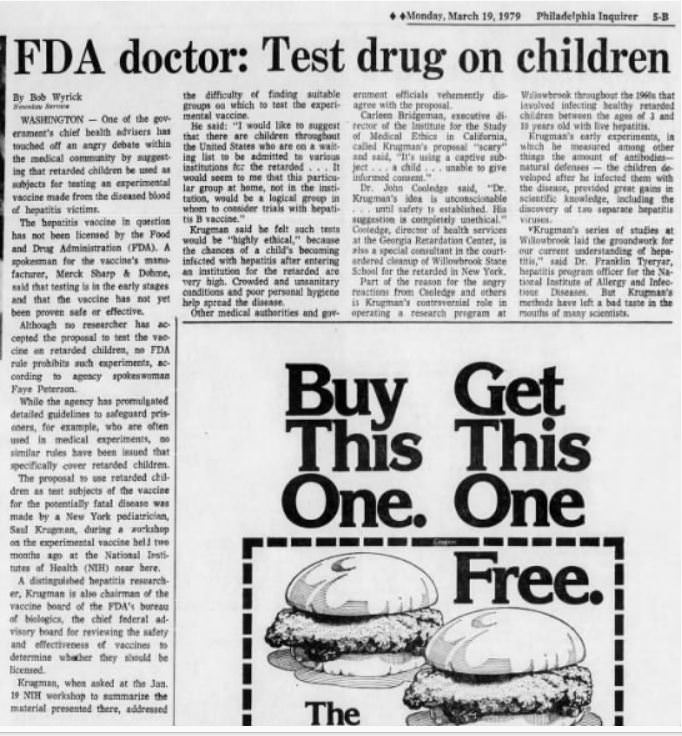 In March of 1979 Dr. Saul Krugman was met with major backlash when he suggested that “retarded children” also be tested with the vaccine until public outcry put a stop to it, yet the tests for homosexuals went through without a peep.

Krugman was well known in the scientific community for a very controversial program he ran in the 1960’s, where he injected healthy “retarded children” between the ages of 3 and 10 with the live hepatitis virus. He studied the effects and watched as these children went through extreme suffering, with some dying as a result of the experiments.

The first CDC report on AIDS came out in August of 1981, which reported 26 known cases as of July 2nd, 1981, with 70 more cases being reported since the conclusion of the first official study. As of August 31st, 1981, at least 96 cases had been reported, and of them, 43 men had already died.

What was being reported at the time was that it was two separate diseases infecting the people, one Kaposi’s Sarcoma, and the other, pneumocystis, but they were striking more than 200 times more frequently than normal. The other oddity was the fact that neither of the two conditions were normally fatal, yet the mortality rate for this new combination was above 40%.

“Really, there is no logical, obvious cause” said Dr James Curran, who was the chief of the CDC AIDS task force in 1981, “there’s something wrong with everyone of our theories”.

The religious right wingers were even using the oddity of the new disease as a sign from God!

The only theory that made any sense to the investigators was that the men had all taken some type of drug contaminated with a chemical that attacks the immune system. As of May 21st of 1982, at least 355 cases of the combination illness had been reported to the CDC, with at least 137 deaths, most of them still being in New York, San Fran and LA, and most still being homosexual men. By this time though it had spread into the heterosexual community with at least 20 of the cases being reported in heterosexual men, who very well could have been bisexuals or in the closet, and at least 13 cases reported in heterosexual women.

By the end of 1982, 447 people were dead from the still unknown virus, later to be called AIDS.

“We’ve never before seen this type of immune defect in nature” said CDC Epidemiologist Mary Guinan in 1982 “Something is happening in the environment”.

Even though it was well known that HIV/AIDS was spreading into the Heterosexual community in the United States, Dr. Anthony Fauci is quoted in am article from October of 1983 as saying “AIDS continues to be confined to homosexual and bisexual males, IV drug users, Haitians and hemophiliacs”, but why would Dr. Fauci lie to the world about this new infectious disease?

Homosexual males were increasing in their ability to come out socially beginning in the late 1960’s, which I believe scared the hell out of some people in the government and academia, who had kids of their own who some didn’t want to be gay. Some parents in the late 60’s and early 70’s had less of a fear of sending their kids to Vietnam than they did of Johnnie bringing home Michael, instead of Michelle.

Now that we know the US government lied about Vietnam, and allowed hundreds of thousands of people to die, along with 50,000 of our own. The same US Government that used agent orange on millions of people in Vietnam and even allowed black men to needlessly die and suffer from syphilis in the Tuskegee Experiment, all without a single person ever being held accountable. So it doesn’t make it so hard to believe that that same group also might have been lying about the origins of HIV, or does it?

UPDATED INFORMATION FROM WIKILEAKS SHOWING DIRECT LINKS FROM NIH TO HEP B TESTING IN AFRICA: